The Science Behind Skiing and Perfecting Ski Jumps

There’s more to skiing and ski jumping than you may think– there are many forces at play when you adorn those skis and glide down the slopes or shoot off the jump into the air. And if you want to up your skills in both departments, it would bode well to swot up on the science behind skiing and ski jumping to use this knowledge to your advantage on the snow. 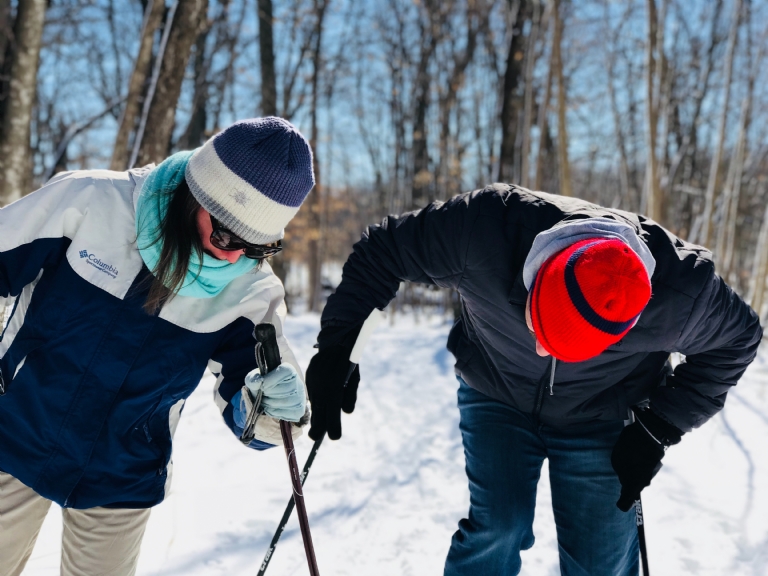 The Science of Skiing

To begin with, let’s start with the forces acting upon the average skier. There are the internal forces which are generated by the muscular-skeletal movements of the skier, while external forces are those that work upon the person. In order to maintain your balance when skiing, you must utilise different movements or risk making a fool of yourself. Staying upward can be a difficult thing to master for beginners because these external forces can wreak havoc on your ability to do so when you start to ski.

When a skier is stood still on two flat skis, their centre of gravity is equally balanced over their base of support (even if beginners may look like Bambi on ice). If the contact area is reduced or forces are increased, the pressure will also be increased causing motion (as gravity is the driving force that makes you go!). This is represented in the equation P= F/a (where P= pressure, F= force and a= area).

Friction is your best friend here because this is what allows you to stay in control while descending. Resistance is experienced from both the surface of the snow against the skis (which can actually be impacted by the temperature of the air), as well as from the wind resistance against you.

Armed with this basic physics knowledge, skiers utilise this know-how to perfect their techniques and maximise their speed rates. You may notice that skiers kick out/push off at the start gaits, and this is because it can kickstart the acceleration. In order to increase the speeds they’re reaching, skiers work to minimise their resistance to motion (known as the drag force) with appropriate, aerodynamic clothing and advanced equipment. 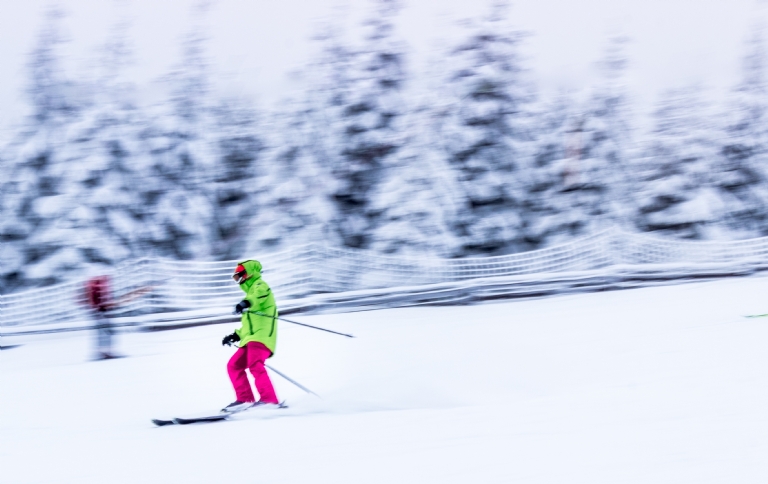 The Science of Ski Jumping

As a skier develops, not only do they want to increase their speeds but also their ability to glide through the air. It’s a fascination that has long captivated mankind, with the ancient Greeks devising wooden, cloth and feathered wings in an attempt to imitate the wings of birds which they used to “fly” from tall towers, hills or even cliffs– ouch! Nowadays, we have ski jumping which allows us to experience, even if it is for only a few brief moments, the feeling of flying.

The aim of ski jumping is to jump as far down the hill as possible, but its more than that. The style is a big part of an elegant jump, with judges marking ski-jumpers on their flair and jump distance to the K line.

Points are determined in accordance with a jumpers distance from the K line, with marks deducted for every meter short they are, and added for every meter far they are of it. Hills are usually categorised in how far the K line is from the starting point; for example, the normal hill in the 2018 Olympics is a K98 where the K line measures 98m from the tip of the jump, while the bigger hill is classified as a K125.

Now, these are long distances for jumpers to achieve. How exactly do they reach 98m or 125m from the end of the jump you may be asking? Well, this is where the physics comes into play.

To minimise their resistance, skiers utilise a host of strategies. First, body position, where bended knees, a crouched position and arms placed perpendicular behind them reduce the drag on the individual by decreasing the surface area of the body that has contact with the air. You’ll also notice their outfits; they’re not all for show! Their microfibre suits (which are described as somewhat spongey) are aerodynamic in design to improve their chances.

But air resistance is not the only thing ski jumpers have to consider; the friction along the bottom of their skis can have a major influence on their jump. Hot wax is smoothed upon the top of the plastic-made skis to reduce the friction caused between the skis and the snow. Yet, the type of wax used is also dependent on the weather conditions and temperature. Modern ski jump in-runs are made with ceramic tracks with cooling systems to ensure skier safety and better performances.

In flight, ski jumpers use the physics of gliding to guide them, utilising the momentum delivered by the ramp and controlling the aerodynamic forces at play: weight, drag and lift.

The air will hit the face of the jumper horizontally, but the lift will counteract this, pushing them upward and getting them further. Contrary to the first section of the jump, skiers must stretch out their bodies and skis in order to maintain a “flat as possible” position to increase surface area (and as a result, their lift).

You’ll notice that a jumpers skis are slightly different to cross-country and alpine skis and this is because their design is vital for flight. Jumpers skis are 145% of the skier’s height in length and are designed to be 1.5 times wider than the typical alpine skis; they are also very lightweight, coming in at an average of 7.2kg. Jumpers will move their skis into a V shape, with their arms positioned slightly away from their body, a method that was first considered in 1985 because it proved to produce around 30% more lift than the previous parallel ski positions that were used before. On occasion, you may see jumpers moving their arms and hands to encourage a longer airborne stage. 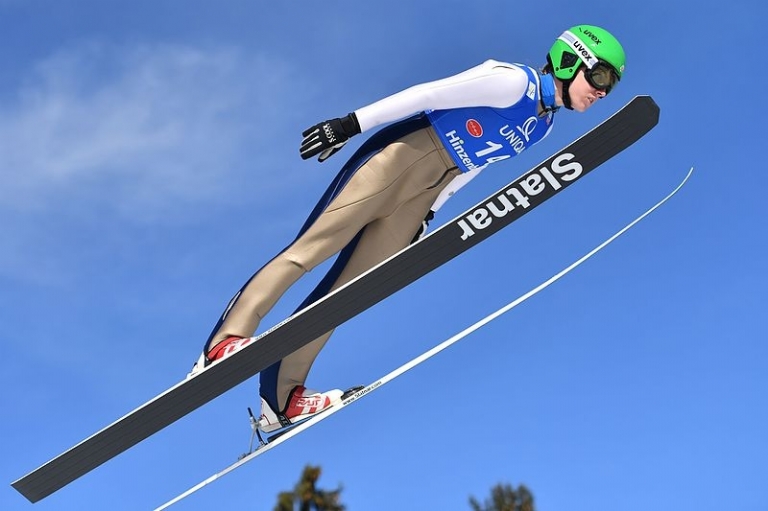 Lighter skiers will “fly” further than heavier ones, due to gravitational pull– so the lighter you are, the longer airborne times you can expect to achieve. Another issue jumpers contend with is drag which slows them down while they are in the air.

Upon landing, ski jumpers move from the V ski position to parallel skis, with one foot slightly in front of the other– with a small gap between them, no more than the width of two skis. In their landings, ski jumpers must consider weight distribution and balance in order to achieve a steady landing. By bending their knees, the ski jumper safely absorbs the impact.

The whole wonderful process from start to finish can take less than 10 seconds!

Why not harness your knowledge of physics at one of our chalet ski holidays? Beginners and advanced alike will find Huckster’s Lodge the perfect base for their skiing adventures in Les Arcs, Serre Chevalier, Tignes or Bovec.

Image credits: Ailura Under CC 3.0 and Iwona Erskine-Kelli under CC 2.0.

I look each year to find a better value ski holiday and fail. I love the staff, the resort and the accomodation. And the coach, to me it makes flying very uncomfortable and un civilised, Dont change a thing Hucksters you are providing exactly what I want. Roll on next season......